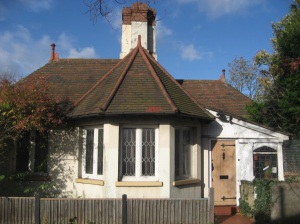 The restoration is nearly finished and in the short term it will be rented out. Longer term Sutton Housing Partnership want to ensure whatever happens to it they appreciate and respect the property. It therefore doesn’t rule out further building on this land.

After many years of uncertainty, Sutton Housing Partnership took on the work of restoring the Lodge. We met with the Project Manager who was very exited to be working on this and the sensitivity of the restoration.

The Wandle Valley Regional Park Trust received the go ahead from London Borough of Sutton to restore the historic Culvers Lodge in Hackbridge to deliver a community meeting facility and co-working space for small enterprises, a not-for-profit bike hub, which will train and employ local people, and new offices for the Trust.

The Trust was asked by the Friends of Culvers Lodge to help identify funding for a feasibility study to assess whether the building could be brought back into useful life.

Using funding from the Heritage Lottery Fund, the Trust have worked with the Friends, wider community stakeholders and LB Sutton for the last 12 months to produce a feasibility study and business proposition. This was submitted to LB Sutton in September.

LB Sutton’s Strategy and Resources Committee on 31st October 2016 approved the recommendation of the Building Utilisation Implementation Board to endorse the Lodge restoration proposals. The Council has recommended the Trust be offered a 99-year lease on the property with a rent-free period.

Sadly the Council wanted to retain part of the site to build on which ultimately rendered the project untenable.

Culvers Lodge was put forward for local listing by Sutton Council at a meeting on 14 October 2014 and granted.

The Wandle Valley Regional Park Trust have applied for funding for a feasibility study to look into the future of the Lodge and what it can be used for.

Culvers Lodge is a Sutton Council owned property based on the corner of Medland Way and London Road.  The property has been boarded up for a couple of years and has been under threat of being demolished and replaced by flats.  The picture above is how the property once looked.

You can see below detailed correspondence from the NDG:-

Further information is available on Save Culvers Lodge Facebook Group.